Is the ICTY ashamed by its own Seselj judgment?

Today, the ICTY issued its Judgment in the Seselj case. The Judgment of acquittal on all counts came as a shock to many observers. Followers of this blog will know that I believed Seselj should have been released years ago, when one of the Judges on the Trial Chamber, Judge Harhoff, was recused (see here, here, and here). I’ll return to the content of the Judgment in the coming days. One thing that struck me today is how the ICTY communications office has dealt with the acquittal.

If you look at the home page of the ICTY, there is no mention of the outcome of the Judgment, despite the Seselj case being one of the most important cases at the ICTY since it was created.

Basically, the first news about the Judgment to appear on the ICTY news page was not the outcome of the Judgment, but the OTP press release regretting the acquittal. I found this a little strange and tweeted:

Some would say that I was just being paranoid and that this does not mean anything.

However, a few hours later, the next news item was still not the outcome of the Judgment, nor was it the fact that the Judgment was now available online. No, it was a link the summary of the dissenting opinion of Judge Lattanzi, who would have convicted Seselj for all but one count. It’s still the case on the website now, but here’s the screenshot for posterity: 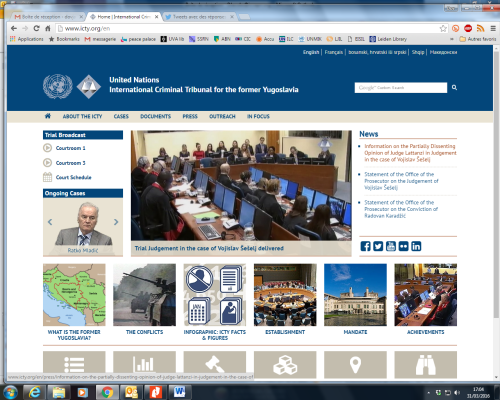 This “choice” by the ICTY media office makes it even more obvious for me that the ICTY is officially trying to put the acquittal under the rug.

As an additional confirmation, I checked the twitter feed of the ICTY. While, for the Karadzic Judgment, the ICTY did live tweeting, concluding with the following tweets:

#Karadzic is sentenced to 40 years of imprisonment.

for the Seselj Judgment, things were very different:

As this screenshot shows, there is simply the announcement that the Judgment is scheduled, then no indication of the actual outcome, followed by the OTP press release.

Just to be sure one more time that I was not dreaming, I went back to the 15 December 2015 when the Stanisic and Simatovic Appeals Judgment was issued, and the ICTY news feed did indicate back then the outcome of the Judgment:

So, clearly, there is a decision made here to minimise the Judgment that was issued today. In other words, the ICTY seems to be ashamed by a Judgment rendered officially by one of its Chambers. Unsurprisingly, I find this absolutely appalling and it is a shameful conduct. The ICTY, as an institution, should stick by the decisions that it delivers, whatever the outcome. I have blackened dozens of pages and spent liters of saliva over the years, trying to explain to everyone that in a criminal law system that is healthy, we should respect the outcome of trials, even when it is an acquittals.

And then, the ICTY shows a total lack of respect for itself. What’s the point in trying in that case?

6 Quick Thoughts on the Karadzic Judgment

Today, the ICTY issued its long awaited Judgment in the Karadzic case. Given its length, over 2500 pages, this post can obviously not provide any comprehensive analysis of the Judgment. I do however want to share 6 quick initial and general thoughts :