in memoriam of Cherif Bassiouni

It is with great sadness that we all learnt last night the passing away of Cherif Bassiouni, one of the giants of international law and international criminal law. He really needs no introduction, but I wanted to offer some concluding feelings.

He was a great jurist, a great scholar and writer. Possibly more importantly, he was a great inspirer. His writings have moved generations of scholars and practitioners into trying to make a difference. He was the perfect and healthy symbiosis between utopia and realist understanding of our world. Cherif Bassiouni was always promoting justice, peace and tolerance but was never preachy about it. He didn’t need to, because he made things sound so natural. God knows I tend not to be easily taken into idealist visions of the world, justice and the future (some would even say that I am cynical). But Cherif was different. Listening to him, you were taken into his words and left with no doubt that everything was possible, even when going back into the world.

Cherif Bassiouni was a key personality in my own professional career. Attending the Syracusa ICL Summer School in 2007 was a founding moment in confirming my decision to do international criminal law and in my love for pleading (I sulked for 24 hours because I didn’t win the Moot Court…).

I usually don’t make personal remarks here, but Syracusa was also important in my personal life. I met my future wife there and some of the people I met there, I still count as my closest friends. Cherif Bassiouni brought people together in many ways…

Ten years later, this summer 2017, I had the privilege of being invited to teach at the ICL Summer School and to meet Cherif one last time. We had a dinner in honor of Judge van den Wyngaert where he made a kind and inspirational speech before we shared moments of joy and singing in probably 12 different languages, a perfect symbol of the diversity surrounding Cherif. I will always remember that evening fondly. Below is a picture Raymond Savadogo, an attendee at the summer school, took as a memorandum (and yes, Judge van den Wyngaert is indeed holding a guitar, but that is a story for another time…).

I cannot claim that we were friends, but the few time we met and had the chance to talk, there was always a sense that he cared and that nothing else mattered for that moment. He was, simply speaking, a truly remarkable human being.

Cherif Bassiouni will be missed by all who had the honor of meeting him and knowing him. There are few people I would say this about, but I am proud to be part of his legacy and to carry it forward. 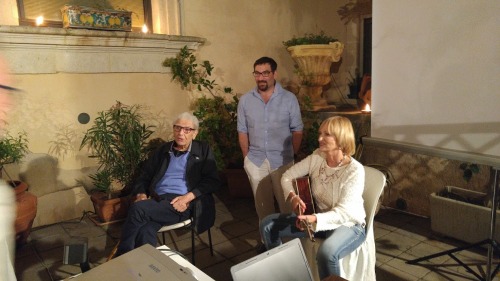 This entry was posted in Uncategorized. Bookmark the permalink.

One response to “in memoriam of Cherif Bassiouni”